Young, Black And On Track 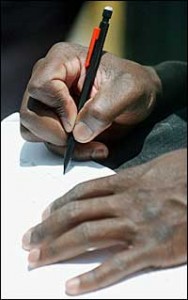 African-American boys: lose the skullcaps, pull up the droopy pants and get to work. Parents, teachers, employers and girlfriends agree. If you’re looking for your future, you’ll find it in school.

While the rest of the country toils in universities and technical institutes to acquire the skills for professions, and the knowledge to understand the world, black boys — to an alarming degree — are lagging in class, dropping out or stumbling across the high school finish line with too few skills to make it through college.

Wherever you turn, these boys are notable by their absence.

More than 70 percent of historically black Clark Atlanta University’s students are black women. Some 65 percent of students training to be doctors at Morehouse School of Medicine are female. The point is inescapable — young black males are too often missing in action when it comes to academic achievement and preparation for college.

As it happens, there is a general trend among boys, white and minority, to trail female students in college enrollment and in graduation rates. However, black boys in particular are having acute problems academically — so acute that many drop out of high school at the first opportunity.

The malaise among black boys extends across economic lines. In an important study published this year of the Shaker Heights, Ohio, school system, where virtually all youngsters come from middle- to upper-class households, African-American student achievement trailed that of whites, and black boys as a group trailed all other groups. The analysis by John Ogbu was published in the spring, and titled Black American Students in an Affluent Suburb: A Study of Academic Disengagement.

The Georgia Board of Regents found in a recent study that nothing short of a comprehensive improvement seems likely to get more black boys through school and into higher education. The “Final Report of the University System of Georgia’s African-American Male Initiative,” was published May 21.

What’s needed, the regents say, are teachers better equipped to deal with balky black boys, as well as persistent parental support and better-organized outside mentoring help. Most of all, school systems need to consider dropping the vocational education pathway, a convenient way to divert students who don’t fit. Instead, the regents say, put everybody on the college track and make it clear the schools expect all to achieve.

A pattern among African-American youngsters is that they emerge from elementary school in reasonably good shape, if they learn to read in timely fashion. However, when they try to cross the fast-moving, rock-strewn river called middle school, many black boys get swept into fads, laziness and indifference, falling behind, never to catch up.

Searching for answers, I checked in with some of the most careful boy-watchers around, black girls. Invariably, my query — “What’s the matter with the guys?” — was greeted with smiles and a rather short list of answers:

They seem to have no focus. They don’t seem to be able to make long-term plans and stick with them. They get caught up too much in fads, in whatever seems to be happening right now. Following the crowd means more to them than to girls. If something looks appealing to them, they can easily be led off their path and into something else. In one way or another, the girls said, the brothers lack focus or priorities.

The young men themselves, talking about what is important, betray a materialistic streak often reflected in music, particularly rap, videos and in some movies aimed at youth.

Youngsters, even in college, sometimes talk, yearningly, about dropping out, getting a job, buying a “truck,” a sport utility vehicle loaded with booming sound gear; rolling on “dubs,” outsized 20-inch wheels or “Sprewells” — double rims that can cost $7,000 and more a set. It is a life so compelling to some that they find it hard to postpone such goals to study beyond high school.

Other boys, also fixed on short-term results, daydream of athletic careers and overnight success as entertainers, careers available to only a minuscule number.

James Poole, a YMCA staffer or consultant most of his adult life, has made mentoring boys an avocation for 40 years. An excellent coach, Poole initially got boys’ attention through basketball, and then through personal mentoring. Now based in Columbia, Md., he advises community groups.

Several years ago, nearly 100 of the African-American men he mentored gave a testimonial dinner for him in Cleveland; they included ministers, executives, scholars with doctorates and media people. Morse Diggs, the Atlanta TV broadcaster, is one of them.

In later years Poole counseled girls as well as boys, so he was ready to draw contrasts.

“For guys more than girls, instant gratification seems to be important,” said Poole. “And for some, drug-taking becomes the gratification, and for some, notoriety or a damaged reputation is better than a nonexistence.”

By contrast, he said, “It is much more common among modern black women to think long-term gratification rather than instant success. . . . they know how to plan their work and then work their plan.”

And nothing, not even sweet-talking boys, gets them far off their track, Poole said.

Black women, like white women, have bought more heavily than black males into the notion that the glass ceiling can be penetrated, that opportunities are out there if you are prepared to grab them.

Compounding the aimlessness that marks too many black boys is the fact that school systems seem to cast them aside easily. And there are lots of detours, especially with the coming of more testing to reach the next grade.

A Cobb County executive pointed out to me one of the ways youngsters get sidetracked, especially if parents are not closely involved with students’ success. She asked whether her daughter, having gone through fifth grade with all As and Bs in math, could take pre-algebra in the sixth grade.

“Not unless she passes a test for pre-algebra,” was the answer.

She asked, “Suppose she comes close but fails to hit the mark?”

The answer was that she would have to take general math but could retest in a year.

“Logic told me,” said my friend, “if you cannot measure up to pre-algebra in the fifth grade, a year of general math certainly won’t make you more qualified, and that is an example of how kids can fall off the college track at a very early age.”

Her point was that if kids have to negotiate the education system without close parent involvement all the way, they can easily get sidetracked and discouraged.

Nearly everyone, including the regents in their 85-page report, sees better teaching as a key to better performance. They urge programs to retain good teachers. Louis Castenell, dean of education at the University of Georgia and an expert in the problems of urban teachers, says any teachers can be trained to improve their relationship and communication with black male students.

“Young black males can just look at a teacher, especially the white female teachers, and sense fear and distrust,” Castenell said. “That leads to a situation where teachers distance themselves from youngsters who make them uneasy, and select only the best-behaved and most compliant students as favorites — and regarding the others as deviant.”

Only training can help teachers improve those relationships, he says.

“I sit here ready to help but my phone does not ring often,” said Castenell, a member of the regents’ task force on the African-American male study.

Tell a friend about us!